6 Tips for playing at the Improv Open Stage

On December 8th Troeba will host another Improv Open Stage in the Pesthuys Podium in Maastricht. A wonderful opportunity to meet other improv players and be inspired by other people’s playstyles!

Are you a beginner and would you like to dip a toe in the improv water? Or are you already more experienced as a player, but have you not played with a lot of different players before? Or maybe you have been nothing short of an improvisation god in the past, but you are just feeling a little rusty and less divine at the moment? Then, read on for some easy tips to have a good time during the Improv Open Stage 🙂

1. Give your fellow players a good time

This one is just a little mindshift and a great start when playing together with new people. Especially when you are a little intimidated by the skill level of your newfound co-players, instead of focusing on making sure you are seen as a good player, just focus on giving them a good time. That feels better right? Also, when you yourself are aware of the fact that you can be a little ‘show-offy’ sometimes, focusing on your colleagues’ fun helps you gear towards a more ‘working together’ playing style. Now that we made giving your co-players a good time priority, also try to…

2. Make a clear choice at the beginning of your scene

Giving your fellow player a good time becomes much easier if you take care of yourself first as soon as you start playing. That means that you should start the scene by giving yourself something, that your co-player can start working off and reacting to. Almost anything can work: choose a body part, emotion, status, strong opinion on something, mannerism, personal object, and so and so on…

Obviously a good advice to any improviser in any performance context, and even more so in the context of an open stage! Saying YES! to any offers that are being made in the scene keeps up the positive vibe and keeps you away from trying to control the scene. Letting yourself be changed in the scene instead of constantly trying to change the other person, almost always makes the scene look more fluid.

4. Agree on the game rules

This tip is specifically for when you play a short form-game coming from, for example, Theatre Sports. Take your time at the beginning to make the “rules” of the game clear, so that everyone knows what you mean by “I need four players for the Revolving Door of Madness-game!”.

This tip combines some of the above. Should your fellow player miss a cue, call your character by the wrong name, misunderstand a specific game mechanic during a scene, or mess up your carefully constructed scene plans, try to go with it and solve the inconsistencies! Don’t linger too long on the “mistake”, simply accept it and make it work!

Let’s not forget about your non-improvising friends and family that came along with you to cheer for you! So, even though the Improv Open Stage can easily become a insider’s party for the Cult of Improv, take your time to explain those games “that everybody knows”. Also, when asking the audience for input for your scene, take into account that the less experienced improv audience might need more encouragement or help with giving you suggestions than the improv heavy-weights that have no trouble spitting out 10 different locations in 2,5 seconds…

And of course… have fun!

We hope to see you on stage or in the audience on December 8th!

Follow this link to reserve your ticket for the Improv Open Stage, and/or for one of the workshops in the afternoon! 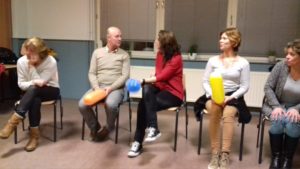 A whole night of improv theatre! With a beginners workshop to warm you up, and then play, play, play! More info through this link!

Make a Greek tragedy in just one week together with fellow young actors up to 25 years old! Play as an actor, or join us in the orchestra! For more info, check www.aischylos.com!